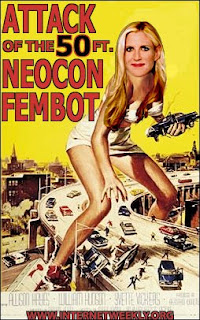 Returned to the Left Coast after some time travelling and non-blogging, to find that Ann Coulter has used the F word in reference to John Edwards.

If only Ann had called Edwards a "pussy", she could have made her point, been suitably offensive and not been dragged off to the stocks for punishment... If JohnBoy were not a pussy, he would have called Ann an ignorant bitch...and that would be that. What ever happened to the glory days of SNL's Point-Counterpoint? "Jane, you ignorant slut." I actually wish Ms. Coulter and Ms. Edwards would settle the issue of verbal insults in the same way that I wish Isaiah Washington and TR Knight had settled it (see post of 1/14/07...The F Word). I'd be fascinated to see who won the fist-fight portion of the program. Any bets?

I'm not thrilled that she called him a faggot. I'm a faggot and I don't want him to be one of us. Rude language is, well, rude. But therefore effective. What good is name-calling if it doesn't offend?

But: What does it say about a society when even right-wingers sign petitions disassociating themselves from someone who has served their cause, caustically but consistently, because she uses a word that "faggots" themselves use all the effing time? It's like "nigger". When a non-black uses it, all hell breaks loose. But it's a staple of black conversation, comedy and music, at least among the cool set.

Am I the only one who finds this more troubling than Ann's nastiness?
at 7:36 AM

Actually, I know few gays who use that word in the same way as the "N" word. I also know few who don't think that someone should say something about that rehab situation, though most are paying much more attention to the situation with the Episcopal Church than with Ann freakin Coulter.

I'm glad I saw your comment at GoV. You're pic is PRICELESS! I need to send out copies. BTW, I'm the weirdo PFLAG anti-jihadi blogger who angers the ones who gay bash, and it's nice to "meet" you!