Leather, a strange 2013 gay flick made of fragments of interest and weirdnesses. It's not about the gay leather subculture. Available on YouTube.

Some spoiler info below; if you plan to watch it, you may not want to continue reading. 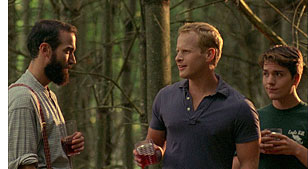 After learning of the death of his estranged father, urban grad student Andrew arrives at their old mountain cabin with his incredibly infantile queen of a boyfriend* and unexpectedly reconnects with childhood buddy Birch, who'd become dad's surrogate son in the decade-long interim. Drama ensues.


*As I often say, right-wing "homophobes" cannot come up with more repulsive stereotypes than gay-originated media. This pathetic excuse for a male is a tantrum-throwing infant who cares only about fashion and his pet rabbit, Mary Anne. Really. No kidding.

The two men are opposites in a variety of ways, which makes for conflict/attraction, of course. The dark furry earth man and the gingerblond smooth intellectual man. A classic pairing of chthonic and ouranic Both of them look very fine in their own way. Andrew Glaszek especially...who's also a decent actor with a boyish but very masculine energy. And they're even better together.