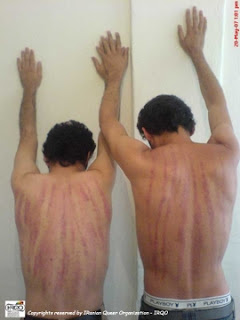 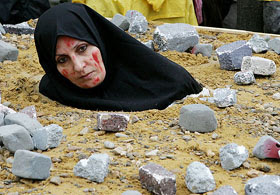 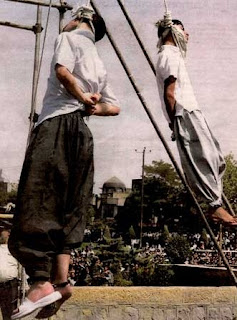 Columbia University mistakenly invited the President of Iran to speak and then Lee Bollinger, CU's own president, tried to soften the gaff by addressing some very clear and critical remarks to Ahmadinejad. Many liberals were outraged by his "impoliteness".

Now it gets worse. A group of Columbia officials and faculty are travelling to Iran precisely to... apologize. Craven dhimmi fools or craven collaborating traitors? You decide. And all too predictable, really.

I provide just a few examples of life in a theocratic Muslim state, the only kind of Muslim state that makes any sense. And as a gay man, the jaw-dropping betrayal of them going on bended knee to the head of a country that tortures and executes people like me (as well as lots of other folks)...

...And I am supposed to feel at home among the multiculturalist liberals of Columbia? I have known for a long time that when it came to choice between a white American male homo and some brown-skinned barbarian ThirdWorld Other, I would be kicked to the curb and trampled in the rush to kiss his thuggish Muslim ass.

Hat tip to Fred in Ottawa.

*And for them of you what don't read Latin, meretrix has given us the English word meretricious and it means "whore".

Update: some contrary voices at CU deny that such a thing is in the offing.
at 8:57 AM

The center image in this post is not an actual stoning, but a protest against stonings. Sadly, all you have to do to find an image or video of a real stoning is search in google...

thanks. i knew that this was a staged image, since i have seen shots of the real thing, including videos. i chose it because it made the point without being as gruesome as the real thing as well as having better photographic quality.