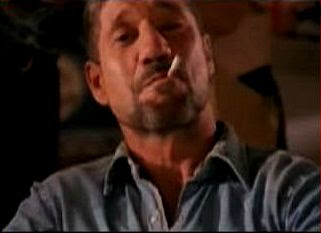 Woof. In a certain subculture, a friendly bark of one dog to another, an expression of appreciation from one man for the fineness of another. Not a phrase I utter often, but some men just bring it out of me.

Fred Ward, for example. A fine and under-rated actor. In comedy mode, in Tremors (1990), when he was in his late forties, he was pretty well my idea of Woof. Even then I liked my men...well-seasoned. I am watching the flick right now, having stumbled onto it on TV whilst playing with an Excel spreadsheet. I'd rather play with Fred.

The frame. The mug. The voice. The moves. The grin. Woof.


I loved BBM, the short story --stunning-- and the movie, which I have seen a half dozen times. It may be the most spoofed film in history. But here I post one just because of Fred.
at 7:43 PM