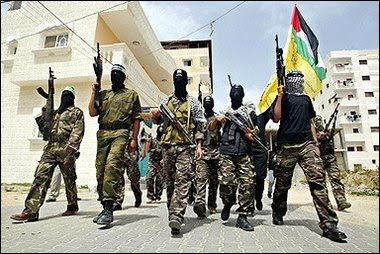 (Your local chapter of the Friendly Fatah)
A group called The Association for Civil Rights in Israel has petitioned the Israeli Supreme Court to prevent the government from sending back to Gaza a group of Fatah members who fled from Hamas right into the safety of the illegal and immoral Zionist Entity which Allah loathes with all His soul and to whose destruction all of them are dedicated.

These high-minded Hebrews hold that sending their enemies back to their other enemies would be "one of the most severe human rights violations and is a breach of Israeli law and human morality". Mahmoud Abbas, by the way, refused to give these guys asylum in Palestine!!!

If Israel had existed prior to WWII, I can imagine these folks demanding that Israel give asylum to Ernst Roehm and the Brownshirt SA when they were fleeing from Hitler on the Night of the Long Knives.

I have an idea. I suggest that Israel keep the Fatah guys in safe custody and send an equal number of the Jews from the Association for Civil Rights In Israel back into Gaza. Sorta like the Trinitarian and the Mercedarian friars used to do in the old days when the North African Muslims captured gazillions of Christians and sold them into slavery; the friars would exchange places with a Christian slave.

You can't make this stuff up.

PS. Hat tip to my friend jpnill aka emailior fabbro for this bit of info.
at 11:42 AM