Passions: the personal is not political 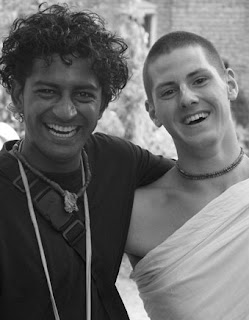 One of the most insidious slogans of the Left is: The personal is political. On the surface, it sounds like a call for integrity. But it is actually a recipe for totalitarianism. Watch the story of gay Cuban poet Reinaldo Arenas in "Before Night Falls". It's all there.

Of all the men I know, or have met of late, only one of them shares anything like my political viewpoint. The rest, with few exceptions, are all ordinary liberals or even self-described lefties. Yet, if I discern in them the kind of character that I like, it does not stop me from getting to know them. Some have even become friends. Or more. Of course, they have to be the same kind of man, that is, they have to be able to accept me despite my troglodytic views on The Great Questions Of The Day.

This is an odd and, to me, wonderful capacity. It is odd because it makes us so inconsistent. I voted for the currently hapless George Bush, and would do it again, given the same choices. ( Choice? What choice?) Most men I know carry a visceral hatred for him. But the ones whom I connect with and who do not make agreement on this subject a requirement for connection...this is intriguing.

What would happen under stress is anyone's guess. I don't like to think about it. Sarajevo. The American War Between The States.

I have had rifts with beloved men over politics. It is achingly awful and always feels stupid. But it is humanly logical. Maybe I am feeling Freudian today, but the triumph of love over ideology strikes me as something numinous. The dear love of comrades.
at 7:07 AM